“Hey Keith, who are the best wedding bands in Ireland?” This is a question I get asked a lot by couples who have booked me to film their wedding. After the vows are all said and done, the speeches are out of the way, the party is about to begin it’s time for the evening entertainment! Music is such a big part of this. As a wedding videographer in Ireland, I get to see a wide range of bands across lots of different genres. Most are decent, and some really stand out as having that little extra something. There’s no accounting for taste though. Let’s face it, choosing a wedding band is highly subjective.

A short while back, I wrote about the best wedding photographers in Ireland. That post was based on who I’ve worked with so far. This article about Ireland’s leading wedding bands is no different! I can only write about who I’ve actually seen play at weddings. 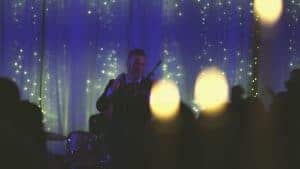 The Top 12 Best Wedding Bands in Ireland – My Recommendations

Before we get started, a little disclaimer is needed. There are probably hundreds of wedding bands in Ireland. I haven’t seen all of them. Also, on any given wedding, I’m usually only there for the first 15 minutes of the band’s performance. This is enough to get a good impression of how they open, but not long enough to get a sense for how they perform for the full event. That’s an important point.

Having said that, I’ve been working in the wedding industry since late 2004, so I’ve seen a lot of bands come and go. I reckon, by this stage, I have a good sense of what makes a decent band for a wedding.

In the list below, I’ve probably forgotten a decent band or two. Sorry about that, it’s definitely not intentional! If I’ve left out anyone really obvious, please give me a heads up below.

So, enough of the disclaimer. Let’s get on with my list of which wedding bands in Ireland have made a good impression on me!

Arthur Wedding Band is a bunch of young, energetic and talented musicians. Some say they’re one of the best modern wedding bands in Ireland at the moment. They’re also very friendly and approachable. I saw them playing at a K Club wedding and they really rocked the place.
Their website: click to visit

The Blue Moose wedding band have been around for a long time and they’re well respected in the industry. They have a large repertoire of songs and the lead singer has a great vocal range. I’ve seen Blue Moose play at a Ballymagarvey Village wedding and also at Johnstown House Hotel.
Their website: click to visit

The Connor McKeon Wedding Band have an excellent reputation built up over many years. They’ve performed on The Late Late Show. They play a wide range of music designed to keep guests dancing away right to the very end. I saw them playing at a Druids Glen Hotel wedding and they did not disappoint.
Their website: click to visit

I know the lads from Pink Champagne Wedding Band for a long time. What a cool band! They’re versatile, energetic and they pride themselves on filling the dance floor. From what I see, they always deliver on that promise. They’re one of the best bands that play weddings in Ireland. They have an ultra-fast set up too, so you won’t be waiting long for the party to kick-off!
Their website: click to visit

I regularly see Sway Social Wedding Band at events. They’re a very popular band with a cool disco vibe going on. Recently, I saw Sway Social play a wedding at Mount Juliet Estate in Kilkenny.
Their website: click to visit

For something completely different, you’d want to check out Spring Break 80s wedding band. These guys know how to entertain! Dressed in full 1980s costume, they really do look the part. They have a great repertoire of music from the eighties, a genre that is popular with multiple generations. I recently saw Spring Break 80s play at a wedding in Horetown House and the guests were blown away by them.
Their website: click to visit

The Controversial Allstars have a super line-up of talented musicians and are fronted by former Picture House singer, Dave Browne. Musically, they’re very tight and you’re guaranteed to be entertained all night long. I recently bumped into the Controversial All Stars Wedding Band at a Virginia Lodge wedding.
Their website: click to visit

The Favours Wedding Band are a four-piece group of very experienced and talented musicians. They’re considered by many as being among the top wedding bands in Ireland. The band’s frontman, Mick, always creates a great buzz in the room just as the couple make their way to the dance floor for their very first dance together. They have a superb repertoire of songs from oldies to modern stuff and their four-part vocal harmonies are a real joy to hear.
Their website: click to visit

I don’t know the lads from The Mixtape Wedding Band as well as I know the other bands on this list but they earn a well-deserved inclusion here. I’ve seen them perform at a couple of weddings and they were great!
Their website: click to visit

The Panoramics Wedding Band are a lovely group of lads from West Wicklow. I regularly see them at weddings and the last time was at a Shelbourne Hotel wedding. You’ll find they have a fresh and dynamic feel to their set. The dance floor will be pumping! The Panoramics also offer a package for ceremony music.
Their website: click to visit

The Ratzingers Wedding Band are an award-winning top band with a female lead singer. They have great energy in their performances and cover songs from so many genres. It’s always great to see them play at weddings.
Their website: click to visit

The Suite Wedding Band are a happy-go-lucky bunch of sharply-dressed musicians who are ready to rock your wedding! They cover everything from pop, rock, country to waltzes, funk and soul. There’s something there for everyone!
Their website: click to visit

Deciding on the right wedding band can be confusing. There are many incredible bands out there to choose from and lots of different factors to consider.

Wedding Band AND / OR a DJ

Some questions that couples have asked my advice on before:

Is it better to have a band or DJ at a wedding?

My personal take is that it’s better to have both. A band will kick things off with a live party feel and get everyone into the groove. Later, after the band have finished playing, a DJ can continue the groove or change the vibe up a bit if that’s appropriate. A professional band and DJ, who are good at their jobs, will read the audience and play to the room. They’ll instinctively know what type of music is needed.

Is a DJ or band cheaper for a wedding?

Usually, a DJ will cost less than a band for a wedding because a DJ is just one person. A band will have more members and each of them will need to be paid by the bandleader.

Can you have a band and a DJ at your wedding?

Yes, absolutely, you can have both a band and a DJ at your wedding. Most of the weddings I film have both.

How to Choose The Right Band For Your Wedding

In my opinion, one of the most important things you can do before booking a wedding band is to actually see them play. The best way to see your potential band play is either at a showcase or when they’re playing at a wedding. Come to think of it, so many couples find their ideal band for the wedding after seeing them look after the wedding entertainment at a friend or relative’s wedding. If you walk away completely wowed by their entertainment, then you have a good idea of what makes a good wedding band.

Some bands organise wedding showcases at various times during the year, especially throughout the busy booking season from September through to March each year.

After you’ve seen the band play, you’ll have a very good idea whether or not they’re right for you and your wedding. Some couples will create a shortlist of a few bands they like and then narrow it down when taking some other factors into account. These factors will be different for each couple and a lot of it will come down to personal taste.

Booking a wedding band is relatively straight forward. Each band will have their own separate process for signing the contract and officially hiring them to play at your wedding.

Questions To Ask Your Wedding Band

What questions do you ask a wedding band? Sometimes, on popular wedding blogs and websites, you’ll see a list of questions to ask your band. Some of these questions are great but some, in my view, are a bit unnecessary. One such example is “what will the band wear?” Rest assured, if a band have a good reputation (which you can easily find out by searching online for wedding band reviews), they would not have earned that reputation if they turned up to weddings wearing inappropriate clothing. All of the leading bands that I’ve highlighted above dress appropriately for the occasion.

Many of these bands are members of a wedding band association that promotes excellence when it comes to their individual members.

Here are some questions that I think any professional band would be very happy answer for you:

So there you have it – that’s my personal view  on who are among the best wedding bands in Ireland. It was originally going to be called my top 10 wedding bands but, oops, that turned into 12! I hope you find this along with my complete guide to choosing your band for the wedding helpful. There’s obviously much more to picking your evening reception entertainment than simply the prices or cost of the wedding band. Best of luck with the rest of the wedding planning!